Click to download bio
POLITICAL ROOTS
For Keith, politics was part of the family business in Brooksville, Mississippi. His father, Sam Heard - better known as "Big Tiny" - was one of the founders of the Republican Party in Noxubee County, Mississippi. His brother Sam Heard, Jr. - you guessed it, "Little Tiny" - ran for Noxubee Sheriff.

Keith earned a Bachelor of Arts degree in history from Mississippi State University but quickly shifted into politics working for the Mississippi Republican Party and then on the 1978 Senate campaign for then Congressman Thad Cochran. After that victory, Keith served as one of Cochran's first Senate staffers.

Keith would maintain his passion for politics throughout his career. On the national level he served as Regional Director for Dole for President in 1987-1988; served as an alternate delegate to the 1988 convention; and in 2016 he was a delegate to the Republican National Convention from Mississippi for Donald Trump. He is a longtime member of the Mississippi Republican Party Executive Committee and has served as Chairman of the Mississippi United Republican Fund and Chairman of the MSGOP First Congressional District Caucus. 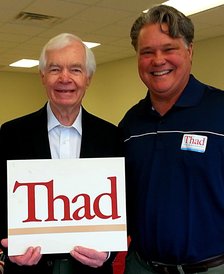 THE RETURN TO COCHRAN WORLD
​In 2014, Cochran faced a Republican primary challenge funded by millions of dollars in out-of-state Tea Party groups looking for a big win. The challenge was nearly successful as Cochran trailed in votes after the primary, but faced a three-week run-off.  Keith, stunned at Cochran’s near defeat, met with the Senator as the results came in, and the next day took charge of the campaign. Keith oversaw an immediate shake-up in staff, tactics and strategy which included empowering supporters across the state to launch their own efforts without filtering plans through a campaign staff bottle neck. Keith shifted the tone from “let’s discuss” to “yes, go.” Cochran's reputation and integrity prevailed and as Keith points out, "The reason that Thad Cochran won is Thad Cochran." The Washington Post reported the result:

“Mississippi Sen. Thad Cochran's stunning runoff victory over conservative state Sen. Chris McDaniel on Tuesday night broke almost every rule of politics. After trailing the lesser known McDaniel in the June 3 primary, Cochran, in three weeks time, managed to: a) grow the electorate in his favor by, among other things, recruiting African Americans to his cause b) run successfully on a message of keeping his seniority in Washington and c) win despite, quite clearly, being the less naturally skilled candidate on the stump. Doing one of those things in three weeks time would be astounding. Doing all three is like watching someone pitch a political perfect game; you'll not see a victory like this one any time soon. All in all, an absolutely amazing race. One that will be studied by political science classes for years to come -- and rightly so.”

Following the campaign, Cochran shifted his chief-of-staff to be Staff Director for the Senate Appropriations Committee and asked Keith to return to his office as his new chief-of-staff. Over the next year, Keith melded his understanding of “Cochran world” with his experiences in the private sector to set an aggressive tone for Cochran’s priorities. When foreign fish importers sought weaker safety inspections than American aquaculture standards – like those employed by Mississippi farm-raised catfish – Cochran’s office fought back.

“Cochran’s new chief of staff, Keith Heard, a veteran lobbyist on commodity issues, weighed in directly to press typically pro-trade agriculture groups to sign onto a May 4 letter opposing any amendment on the trade bill. ‘It was done under duress,’ said one close observer. ‘Keith Heard put the hammer down.’”

In 2017, Keith returned to the private sector. As President of Key Impact Strategies, with offices in Washington, DC and Jackson, MS, Keith is excited about representing a select group of clients in multiple industries. Keith and his wife, Chrissy, have four grown children and reside in Columbus, Mississippi.